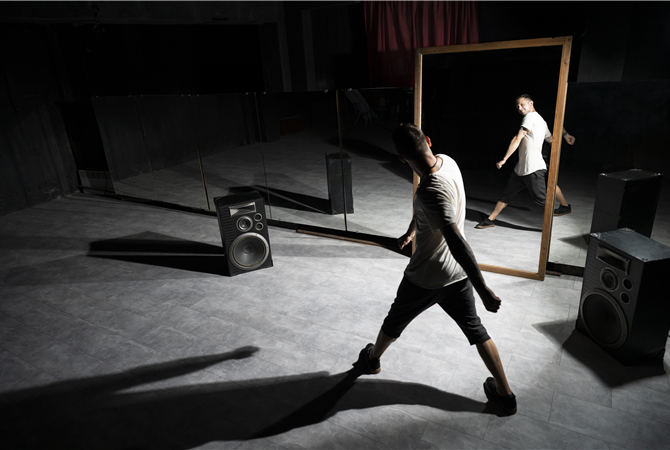 Dance is a way of moving that has been looked at through a limited viewfinder. It has been pigeon-holed as ‘being’ for a certain type of person. In this blog I argue, with Michael Gard’s help, that dance projects a ‘way of being’ on the dancer. If you dance, therefore, you must be a certain type of person. I contend that this ‘way of being’ comes both from the dancer himself (in the case of this paper) and the audience. In other words, the very act of being a dancer positions you (in the eyes of many including the reluctant male dancer) as being effeminate and almost certainly homosexual. In concludes by suggesting that we need to overcome our own sense of ‘who we are’ and imagine ways for all of us to “move in other ways” – ways that don’t determine who we are.

“I can’t dance” is not just a song by Genesis (in which they can’t dance) but the watchword for many men – young and old – when it comes to combining music and body movements. For me it used to be a badge of honour and one that I wore proudly as a sportsman and a teacher: in fact, as a man. Dancing was certainly not something that I wanted to be associated with. I was a man’s man and my sexuality was not in question.

Such was my dislike of dancing that, in some ways, it spoilt my wedding day (and probably many other nights out with my wife) because of my steadfast refusal to do anything but my first dance. I was secure in the knowledge that a) I didn’t like dancing, b) men don’t dance (at least not straight ones), c) no one expected me to be able to dance or wanted to see me dance and would in fact taking the micky out of my dancing if I did, and d) I could get through life quite comfortably (more comfortably in fact) if I didn’t dance.

The fact is I’m simply not comfortable about using my body in that way. I somewhat excel in multiple sports – I always used to say teach me a sport and I can play it in ten minutes (much like you perhaps) – and yet I never wanted to turn my hand (or body) to dance. Why? Was it simply not cool? Not the done thing? Do I really lack rhythm, or do I just lack the desire to get some?

One of my regrets in life has always been my inability to speak another language. As a teacher I didn’t have much call for it as I didn’t travel much for my job and even when travelling for a holiday I got by on the fact that everyone could speak a bit of English. “Eine grosse bier bitte” (or the national equivalent) was always enough to see me through and when it didn’t work I could get by with mime. I remember being on holiday once with my brother in Germany and after a few “lemonades” the night before he was a little worse for wear. I found a pharmacy but neither of us (the pharmacist or me) spoke a word of each other’s language. Certainly not enough to say can I have something for a hangover. After I mimed drinking and feeling poorly, she smiled and said “ah alka seltzer.”

The fact is the body is a tool for communication. It can show emotion and is an integral part of the way we interact with one other and yet many of us (men stereotypically but I am sure that it’s not only men) simply won’t do it. It reminds me of the episode of Friends with the fake Monica. The real Monica takes a tap-classto meet the fake one and is found saying “do you ever just feel that sometimes you are so unbelievably uncoordinated?” just as Rachel dances into shot in perfect time. Phoebe has already shown her legendary unselfconsciousness and is dancing how she wants to dance, and Monica struggles.

This is me. As soon as dancing is mentioned, or music and rhythm are combined in the same sentence, I freeze. Then I laugh (a little embarrassedly) and bring out my catchphrase “I can’t dance.” In the episode of Friends, Monica changes her name and her attitude by becoming Monana and that frees her to be a little reckless. It’s certainly the only way I’ve ever managed to do it. By acting the fool or taking part in school drama I lost my inhibitions. Well a little anyway. Temporarily. But why does it take – in the words of this week’s paper – “being someone else” to free us up to dance?

Gard introduces his ideas by suggesting that there are “only certain ways of moving and thinking [that] are legitimate within schools.” To fit the expected norms is to prosper and to miss them is to run the risk of ridicule. However, what makes matters more complicated is that schools are not the same, and neither are the subjects within them. Gard argues “schools have their own particular multi-layered geographies in which different ways of moving and thinking are either explicitly or inadvertently produced in different places and at different times.” Therefore, to move and think in drama and theatre studies means something different than to move and think in PE or Maths.

PE, as has been reported elsewhere, has a “strong and enduring association with males and male power”. This way of thinking sees maleness and femaleness in very traditional ways. Gard writes that these constructions “show that the ways our bodies ‘feel’ and the ‘natural’ capacities which are assigned to them are …not only a matter for the mover and (in the context of this paper) his sense of himself, but also the viewer/s. That is, embodiment is equally a matter of what looks right as well as what feels right.”

Shawn, working in the early 1930s, was a pioneer in challenging the idea that “a dancing male body was considered unquestionably ‘effeminate’ and deviant, and given the prevailing laws against homosexuality, was not far from being a crime.” He did this by forming a dance company “Ted Shawn and his Men Dancers” and developing an “ultra-macho, ultra-athletic style of choreography.” Gard held that Shawn was a controversial figure. He denounced homosexuality and “was particularly preoccupied with portraying his Male Dancers as athletes and connecting dance with the heterosexual respectability enjoyed by competitive sports.” Indeed he “deliberately sought to recruit physical education undergraduates” and “looked favourably on those who have excelled at some form of competitive sport.” In short, while he fought for the right of men to dance and challenged the stereotypes associated with male dancers, he didn’t seek to challenge the wider feelings in society about homosexuality.

“Alex” (a pseudonym) represents a secondary school boy between the age of 11 and 14. More specifically Alex is a boy who not only has a low level of enthusiasm towards dance but is also a boy who easily states his hatred of dance. While at first sight Gard suggests that this reaction is not easily explained (at least not rationally) it does seem to represent findings from the physical education literature. At the heart of Alex’s belief seems to be “the ways in which sexism and homophobia amongst male (and some female) students and teachers have contributed to the marginalisation of dance within physical education and disadvantaged those students, predominantly girls and women, who enjoy dancing.”

The final example is drawn from Gard’s own work with his teacher education students; all of whom are assessed on their ability to compose and dance a movement sequence of between three and five minutes. Most specifically Gard talks of one performance that drew screams of laughter from all (including himself) and left the audience feeling good.

In one particular performance, five athletically built men walk to the middle of the stage. They are wearing top hats and dinner jackets, pink tutus, black stockings and sports shoes and begin five minutes of well rehearsed movement sequences. They progress deftly from soft-shoe shuffle to oom-pa-pa thigh slapping to slow waltz to heavy metal mosh and more, each section accompanied by its own neatly edited music backing. Towards the end, they strike balletic poses, classical music fills the air and they become prima-ballerinas. Their audience of peers and lecturer, already totally engrossed in the show, scream with laughter. The music stops, the men bow and we roar our approval. We feel good.

Gard talks of the quality of the piece when considered against the assessment criteria and yet its limitations as a means of breaking down our expectations about dance. Drawing on the work of the feminist dance educator Sue Stinson he holds that “this kind of creative dance can make teachers and students feel happy but that it produces ‘docile’ bodies and decontextualized movement.” In other words, while Gard agrees that the students are busy, happy and good he also questions the purpose of the task beyond fun and a sense of getting out of their (the dance) alive.

Gard concludes by suggesting that “who we are informs how we move and prefer to move” and yet he challenges us to think about the “extent to which movement experiences might make available new ways of thinking and being.” This is the challenge to the profession (in all levels of education). How can we overcome our own sense of ‘who we are’ and imagine ways for all of us to “move in other ways” without always becoming “someone else?”