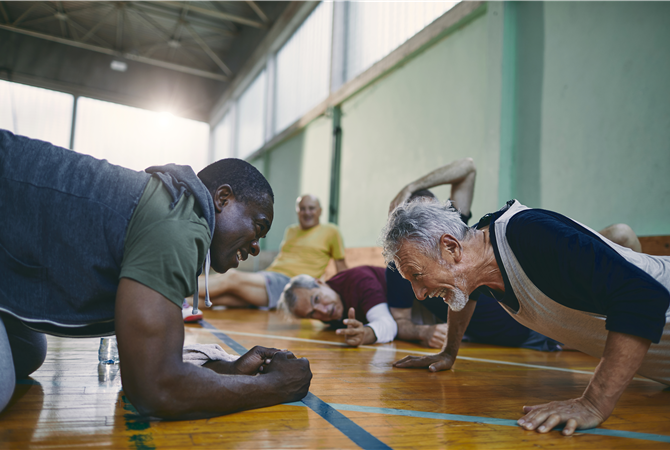 In this blog I explore the link between what 53 year olds did in terms of sport at the age of 15 and what they are doing now. It seems, from this 38-year longitudinal study, that (a) breadth of leisure time activity and (b) their grades in PE are significant indicators of future exercise habits; as is socio-economic standing. I argue that - given these indicators - we need to think radically different about PE. It goes as far as to tentatively ask if we should introduce a fair and deliberate handicap system that might position everyone to succeed?

There are times in life when you just go wow (that is a very quiet wow, said almost in a whisper and taking about four seconds to say). The decades of effort that went into this study was, for me as a researcher, one of those ‘wow’ moments and the ‘wow’ certainly lends huge strength to this paper. Claims are made in research that are based on short, standalone studies, and physical education is certainly no exception. Some of my own research is based on seven lessons, some on seven years even but nothing comes close to the longitudinal nature of this study. A 38-year follow up with over 1500 participants (with a dropout rate of less that 25%) affords this paper the ‘wow factor’ and lends real strength to the claims that are made, and it is with this background in mind that I would like you to read the rest of this week’s blog.

So what are sport habitus and cultural capital and how, as physical educators and adults, can we help kids achieve the highest levels of these by the time they reach 15? Furthermore, how can we advocate for changes in society that seek to overcome the handicapping system that already seems to exist in schools and between communities? How can we tilt the ‘playing field’ to such a degree as to help those in the lowest levels? Indeed those non-exercisers in any of these bands?

In this study, and after multiple quantitative tests of the data, Sport Habitus was defined as a combination of ‘breadth of leisure-time sport experience’ and ‘grades in physical education’. In other words, these were the two factors that were found to be most discernibly associated with future exercise habits. Cultural capital was based on the students’ grades in five theoretical subjects and the family’s socio-economic position (as based on the father’s occupational status). While, as physical educators we can do very little about the second category - at least in the immediacy of our schools and classroom - there is certainly things we can do about our kids’ sporting habitus.

The availability of diverse sporting activities and the opportunity for all kids to develop confidence, movement skills and experiences of moving in different ways and different environments seems key. This means creating meaningful opportunities for kids to develop a breadth of experience in the types of activity that they might engage in as middle-aged man and women. That is not to say that they should simply have multiple short experiences. A curriculum that is an inch deep and a mile wide is not the answer. Instead they should have breadth of experience both ‘of’ and ‘in’ activities.

Furthermore, activities such as walking, aerobics, gym work, jogging, cycling and swimming were shown in this study to be the most popular activities for 53-year olds. Importantly, this culture of exercise is not reflected in the curricular or extracurricular opportunities that are commonly available to young people. So what to do? Is this time for radical reform? What would happen if we only offered only these types of activities? What if, instead, schools realised the importance of physical education and instead allowed us to broaden and deepen the opportunities for learning that we can offer? With a piece of longitudinal research such as this perhaps you have a tool to use in the reform of your programme. You have the wow factor...but can you use it?

In 1968 Engström asked 2462 adolescents from 91 randomly selected schools in four counties in Sweden to undertake a survey that explored their attitudes toward physical education and leisure-time sporting activities. 2144 agreed to be involved (87% of the possible sample). Follow up investigations occurred in 1973, 1978, 1983, 1994, 2001, and 2007. In each case - due to a variety of factors such as non-response, moving house, illness and death - the number of potential participants declined but the percentage of responses didn’t drop below 77% -  a remarkably high return.

This paper - which focused on data gathered in 2007 - concluded by saying “learning opportunities in school must be both broadened and deepened. This is particularly important when it comes to basic knowledge and skills that constitute essential prerequisites for an active participation in different kinds of exercise and outdoor activities.” Such a statement is possible (and supported) because of the unique nature of the study. In other words, because it is both broad and deep in itself.

In considering the contribution of Engström to our knowledge base it is also important to acknowledge a few limitations of the study - ones that he acknowledged himself. Firstly, the world in 1968 was very different to the world in 2007, and that should be used as a filter through which to view these findings. For example, while football remains as a significant part of a 15 year old boy’s experiences of sport - it is not the same game that was experienced in 1968. There are many more and increasing diverse opportunities to be involved in football (that don’t always involve playing) and it has grown considerably as an avenue for the engagement of girls in sport. Secondly, changes in education have occurred to such a degree that levels of education are potentially more significant than qualifications in certain theoretical subjects. In 1968 university was not a common destination for most people. Now, it could be argued it is the rule and not the exception. Finally, there are clearer indicators of cultural capital than ‘father’s profession’ and these could be used to better determine the social class of participants. As such these findings cannot simply be transferred to other generations.

That said, Engström’s research provides us with some stark indicators for future exercise habits. Sport breadth at aged 15 seems to have a significant connection to the likelihood that the same person will be middle-aged exerciser. In contrast, the sports habitus that is normally acquired in childhood i.e through competitive team games, doesn’t have the same apparent connection to future activity. One of the areas of really significance, however, was the similarity that Engström noted between physical training in both physical education and middle-age. This suggests that understanding how and why to do something is important in terms of future exercise.

One of the stark associations that Engström makes is between grades in physical education and future exercise habits. This is made particularly poignant when you consider the rewards and sanctions that come into play in sport. When you are good - especially when you are involved in ‘serious’ sport (and its agenda of competition and ranking) - you are shown to be heading in the right direction because you rise through the ranks and are promoted. In contrast when you are unsuccessful you are demoted or perceived as uninterested or “in the worst case scenario, as a failure and pathetic”. Given the direct link that Engström found between sport habitus and middle-age exercise, and the lack of a connection between competition and the middle-aged exerciser, this is telling. We must move beyond these traditional and competitive ideas around sport and performance and find ways - however possible - to help people succeed in physical education.

The scope of this paper is such I can’t possibly summarise it and keep the length of this blog manageable. To this end I am going to conclude with some questions and a challenge. Engström writes that social class has a significant impact on future exercise habits. He also suggests that someone with high cultural capital (aged 15) is five times more likely to exercise in middle age than someone with low social capital (at the age of 15). Therefore, should we acknowledge that this isn’t a level playing field? Should we be willing to say that there is already a handicap system at play - but one that isn’t fair? Consequently, should we therefore start to conceptualise our own handicap system that helps those who are disadvantaged through no fault of their own to succeed? Finally, if we did that...what might it look like in your school, club or university?

What’s next? As part of this series of blogs I propose the following as a way of considering the implications of this research - Think, Act, Change (or TAC for short).

Think about findings of the paper – do they resonate? Use Twitter (@DrAshCasey) to ask question, seek clarification, may be challenge the findings?