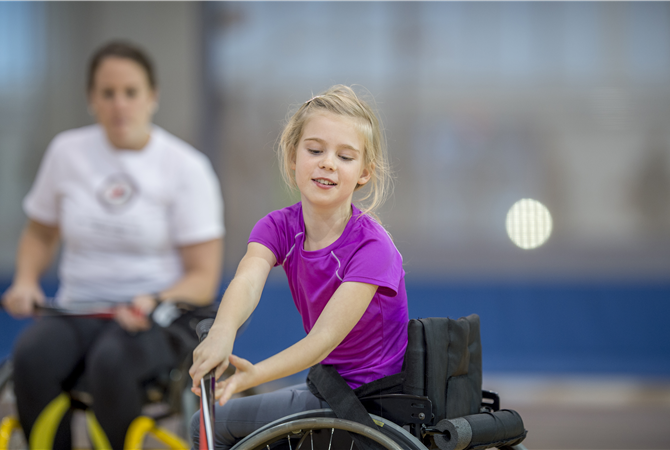 In the previous blog I suggested that game play is an inherently social experience and that techniques are possibly meaningless when the interdependency of passer, receiver and defender is overlooked or ignored. Yet how often is the pass taught with all its ‘friends’ around it? How often is it placed in a sterilized room - having first been disinfected - to try and function in isolation? The blog asked if it was time to take the risk of getting the pass wrong because without its associated ‘friends’ around it, the pass can never be anything but a representation of its true self.

In this week’s blog I explore research around the inclusion of children with special educational needs (SEN) in physical education. The blog asks if, as practitioners, we have miscalculated the difference between inclusion and integration and put our practices and programmes before our students.

When I set out to write this blog I didn’t realise just how many times I would be challenged to think about my own practices as a teacher and now was a university-based practitioner. In reading Smith’s paper on the integration of pupils with special educational needs (SEN) in PE, I was forced to reconsider my actions. In particular it was one of his participant’s response to the presence of a haemophiliac (a disease where a minor wound may result in fatal bleeding) in his rugby lesson that made me think back to a similar episode in my own career.

Before reading Smith’s paper, I was always very proud of the way in which I integrated ‘Steve’ into my full contact rugby lessons. Steve was a haemophiliac who, by wearing a red tabard and playing on the wing, had been involved in rugby at school. How good was I! It seemed that I had found a unique solution to a difficult problem around integration. The reality might be that in seeking to integrate Steve I took a small risk allowing him to play rugby but, as I see it now, I took next to no risk with my programme.

Looking back over my quarter of a century of teaching experience, I cannot bring to mind an occasion where I have actively sought to include my students in their learning by changing what I do. At least not when it comes to SEN. I would argue that in adopting models-based approach to my teaching I significantly changed the way I taught but I question how I deliberately sought to provide equal opportunities to every learner under my care - particularly those with SEN.

I increasingly wonder about the ways in which we have made our way of teaching and our programmes sacrosanct (what the dictionary defines as “especially of a principle, place, or routine) regarded as too important or valuable to be interfered with”). Both seem untouchable but, as Smith demonstrates, it is the students who suffer as a consequence of our inaction. I guess we need to ask ourselves if we have a rational and defensible reason to maintain the status quo? If we can justify it to ourselves then, perhaps, we can defend it to others. But if there are moments of doubt or uncertainty then don’t we owe it to everyone to at least consider how we do things?

To me, the crux of this paper centres on the difference between inclusion and integration. Smith, in his exploration of the inclusion of students with SEN in mainstream physical education, shows how the norm (at least in the schools he studied) is integration. In other words pupils with disabilities, with particular learning needs which may be cognitive, physical, sensory, communicative, and/or behavioural are accommodated in existing physical education programs rather than bespoke learning opportunities being created with these students in mind.

In exploring inclusion Smith suggest that inclusion, integration and mainstreaming are used interchangeably with regard to the incorporation of students with SEN in mainstream physical education. Said more simply, the confusion lies in our interpretation of the idea. He argues the integration of pupils with SEN in mainstream schools involves placing rather than including these pupils in schools and curricular intended to help people of higher abilities. Thus a process of assimilation occurs through which students are made to fit in to the existing arrangements.

Such a situation, while convenient (and many would argue necessary given the existing workloads and constraints within which teachers work), does not create an environment in which there is a genuine equalisation of opportunity for all students: an equalisation that would allow all students to participate as fully and effectively as possible. In contrast, and as Smith explains, we have a reported situation where pupils with SEN are frequently excluded from specific activities (most notably team games and to an extent athletics), are offered a limited programme of activities, and rarely participate in extracurricular PE. This reality seems a long way from the ‘broad and balance curriculum’ introduced in the UK at the turn of the century, nor the promise that no child would be left behind in the US.

One of the core problems which Smith explored was the dominance of traditional team games - particularly competitive inter-school games - in school curricula and the difficulties teachers reported in integrating pupils with SEN in these activities. In other words schools provided many opportunities in the very areas that pupils experienced the most difficulties in accessing.

Ironically, it was in the very areas that have been marginalised in physical education i.e. those of swimming, dance, and outdoor and adventurous activities (OAA) that students with SEN can be most fully integrated. This realisation goes against the idea of setting suitable learning challenges, of responding to pupils diverse learning needs, and overcoming barriers to learning to individuals and groups of pupils that, in some form, appear in both our philosophies of teaching and our national curriculum documents.

Smith said that the major problems reported by the teachers in his study revolved around planning for SEN and the impact this would have on teachers’ workload, especially when teaching had to be changed to accommodate one or two students in a class of 25 to 30. While teachers equated inclusion with equal opportunities, in reality this was often interpreted as providing as much opportunity as possible. On the main, inclusion meant integration which in turn meant an assimilation process in which SEN were required to ‘fit in’ to PE. In reality this meant that many SEN students did not experience the same range of activities as their peers and were often excluded or played only a limited part in team games and athletics. Pupils would often leave to learn or practice other skills or to do another activity when they couldn’t fit into what was planned.

The dominance of traditional team games in the extracurricular programme meant that, despite professing to hold two philosophies around participation i.e. competitive and recreational, no SEN students were involved. While team practices were open to everyone the emphasis was squarely on competitive inter school matches. In defense of this situation, teachers suggested that issues of transport, time it took to change, and self-confidence were reasons why SEN students didn’t get involved in extra curricular activities. While Smith acknowledged that all of these were legitimate constraints on participation he felt that the programme and the focus where more significant as issues.

In planning your sessions how often are you inclusive? In questioning myself, as I did above, I wonder how often I put the needs of others before my teaching? So when planning your next unit of work think about the number of ways in which you might write a fully inclusive program in which there are equal opportunities for everyone to succeed and develop.

Think about findings of the paper – do they resonate with you? Use twitter (@DrAshCasey) to ask a question, seek clarification, may be challenge the findings.