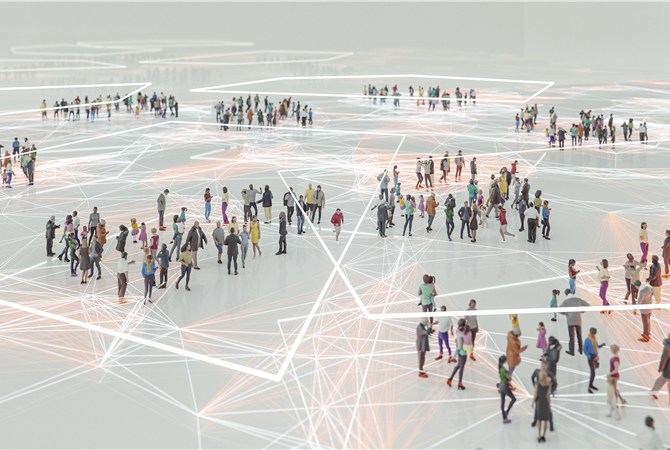 We learn how to behave. In different situations and at different times we learn what is acceptable and what isn’t. We learn when ‘lines in the sand’ might be crossed, should be crossed or must never be crossed. In sport, we learn where the hard and fast rules lie and where the grey areas exist. Once we learn the ‘rules of the game’ we then discover how and when we might push the boundaries, perhaps to stretching point while avoiding the breaking point. For example, you only have to listen to the television pundits talking about what happened ‘off the ball’ to realise what a player can get away with and what they can’t. In other words, we are socialised into the things that we do through observing and listening to others.

At work we learn what is permissible and what isn’t, and we adapt our lives to meet these expectations or we find other places to work. In life we learn how to act and how to dress. Being a basketball player is more than a decision to play basketball but also, perhaps, one to dress like a player and talk like one…at least if you want to be taken seriously. A top hat and tails wouldn’t serve you as well as baggy shorts and baseball cap. In other words, we are socialised into the ways of ‘being’ that are associated with different fields.

Take social media and consider the people you connect to and those you don’t. Think about those whose opinion you really respect and those that you are still finding your way around – so to speak. Why do you follow and listen to them? Why might they follow and listen to you in return? Do you work in similar ways? Do you think in similar ways? Do you ‘talk’ in similar ways? Does this suggest that you both know how to act in each other’s company? Why do you follow and unfollow people? I have heard people talk about joining twitter and lurking rather than engaging immediately with a community they don’t yet know or even understand. Why? Is it to see if you fit? Is it to learn the means and mores of this ‘society’? Is it to learn how to ‘be’ and how to ‘act’?

Think about it in a different way. Have you changed your behaviour, your beliefs by being on social media? If I started to talk about insisting on ‘silence’ in class or rote learning would you follow me or read this blog? I don’t think you would...in fact I know you wouldn’t. But others might.

Over the years I have learnt what I can, can’t and shouldn’t say. Much of this is driven by my acculturation (my absorption of the culture) into polite society generally and education specifically. I have learnt not to swear, and I try instead to respond politely. I understand, I think, how to be a good listener and often respond in a positive manner. I have developed an awareness of how to be a responsible citizen and feel I can exemplify these qualities. Although I continue to make mistakes. Indeed, I continue to learn these things through my engagement with society. But it’s not just acculturation it has been my professional socialisation (my adoption of the general ideas of being an educator and a physical educator) and my organisational socialization (my understanding of how to work in a university generally, my university specifically and how to communicate with others through social media). These are things that act on me and which I act through every day.

I used to wear a branded tracksuit and trainers everyday (marking me out as a PE teacher generally) with a rugby shirt (marking me out as a rugby player specifically) but now I seldom wear them (bit when I do they’re generally branded). These used to be the marks of my trade (or trademarks) and I knew that some brands were better than others. Now I dress the part of an academic. Smart casual. These are things that impact on my daily life and which I learn – often sublimely – as I go along. But if I’m doing this isn’t everyone else?

When we look at last week’s blog we learn about ‘radical doubt’ – a process by which we question what we do and why we do things and open ourselves up to wider discussions about practice. I now ask you to consider “why you do the things you do and in the way you do them?” Why are students acting the way they are? Because they’re learning to be members of a particular society? Why do new teachers arrive to teaching in the same way as their teachers or yours? Because they have learnt that this is what a teacher does and how they should do it? People (of any age) are not blank slates upon which we can inscribe new ideas but are a collection of a life’s worth of experiences.

Lawson’s paper, written more nearly forty years ago, remains an important one because it brought some key concepts to light in physical education i.e. the socialisation of PE teachers. He suggested that we needed to better understand two key ideas in order to better help the subject develop in the medium and longer term. Firstly, he believed that we needed to better understand the relationship between the subjective warrant (i.e. an individual’s choice to be a PE teacher), recruitment and teacher socialisation. Secondly, he believed that we needed to better explore the relationship between teacher education and entry into the school, socialisation in the school, and longevity in teaching. In other words, why did people choose to be teachers, how were they recruited, how were they educated to be teachers, how did this education help them get a job, how did they job reinforce or change their practice, and, as a consequence of all of this, how long did they stay in the job?

In seeking to lay the foundations for research in this area Lawson spent the rest of the paper dispelling some of the assumptions that had been made about physical education teacher socialisation. In doing this he set the field some challenges. While I feel that it is beyond the scope of this blog to explore these challenges in great detail, I do feel that it is important that I try to articulate some of the primary assumptions that Lawson sought to dispel and relate them to the modern day.

Lawson began by exploring the idea that the socialisation of the PE teacher was a lifelong process. Previous to Lawson’s paper it had been assumed that teachers learnt to be teachers at university and were socialised into their ‘ways’ only when they joined their teacher education programme. However, Lawson draws attention to the pre-career experiences of aspiring teachers and suggests that they must now be linked to their teacher socialisation. In other words, their acculturation as students themselves (and in the case of PE into the ways of being sporty and sporting) had a big bearing on their outlook and practices when they eventually became teachers.

Lawson also suggested that there were actually only limited ways in which a teacher could behave. He argued that institutions had enduring legacies of engagement that had survived so long that they were now considered as THE way of engaging. In this way he argued that institutions set “socially acceptable limits of choice” when it came to behaviour – both (in the case of schools) for teachers and students. Consequently, socialisation should be considered as a means of institutional maintenance and not of institutional change.

While Lawson held that institutions’ socialised individuals, he also believed that individuals also tried to transform institutions. He suggested that a form of “social tug of war” occurred in which the individual was not passive in the face of institutional socialisation. In other words, they had a choice. He suggested that they could do one of three things. They could (a) fence sit (by engaging in short-term compliance and impression management), (b) be custodians (by accepting the limits of choice that were imposed by the institution), or (c) be innovative (and act to change the socialisation setting).

Through these processes Lawson argued that prospective and experienced teachers faced three kinds of socialisation that often occurred simultaneously: acculturation, professional, and organisation (or bureaucratic) socialisation. However, while he said it was possible to isolate these different kinds of socialisation for the purposes of discussion, he also said that it was important that they weren’t considered as separate ideas that occurred apart from one another.

Acculturation was described as the ‘rules of thumb’ and the ‘ready-made directives’ that helped people to manage their practices. For example, the idea that ‘competition in life is inherently good’ is a societal idea (i.e. a rule of thumb).
Professional socialization was described by Lawson as a “shared technical culture” for teachers that helps them to learn, perhaps, what should be done and what new thinking is.
Organisational socialization was considered to be about the maintenance of order and the use of proper procedure in the name of routine.
“The point is”, Lawson argued, “all three occur simultaneously and they are often are incompatible.” In other words, the idea that competition is inherent good might be reinforced culturally and organisationally but be challenged professionally. This means that the difference in school programmes and teacher education programmes often make teacher socialisation more complex.

In his final point (and in keeping with last week’s blog about ‘good pedagogy’) Lawson suggested that assumptions and judgements made about what is effective or functional (i.e. the ‘shared technical culture’ that teachers get socialised into) are inherently ideological and reflect the custodial or innovative orientation of the judges. Therefore, there are different views of ‘good’ and ‘necessary’ in PE. If a teacher or teacher educator is custodial himself or herself then innovation is grounds for criticism. Conversely if he or she were innovative then being a custodian would be criticised.

In concluding this week’s blog, I am aware that I have barely scratched the surface of Lawson’s paper and much of his work will remain with me to be used in my contemplations. What I will say though is that we need to have a better understanding of socialisation and the pressure it places on individuals to conform. Only in being open to ‘radical doubt’ (Kelly et al - Blog 10.1.20) can we better understand the position that others are coming from – be they fence-sitters, custodians, or innovators.

So, I ask you, have you been socialised? By who, what and when? Is what you do influenced by your experiences as a student of physical education? Your teacher education? Or your institution? Or, as I suspect, by all three to differing degrees.